Star American guard, Taylor Johnson, joins us for the 2021/2022 campaign. Johnson, who originally came to these shores to play for the Leicester Warriors, more recently suited up for the Thames Valley Cavaliers and showed on a consistent basis why he is one of the best overseas players to ever play in the National Basketball League.

The 6’ 4”, 26-year-old, graduated from Darmouth College, an NCAA Division One school, where he averaged double-digits in scoring and was in the Ivy League’s Top 10 in field goal percentage and 3-point field goal percentage. Since arriving in England in 2018, Johnson has been an exceptional player, averaging 23.4 points per game, 6.7 rebounds, 4.3 assists whilst shooting 57% from the field, 41% from three and 80% from the free-throw line.

Hemel Storm fans, be excited by the prospect of watching Taylor Johnson in the orange and black. 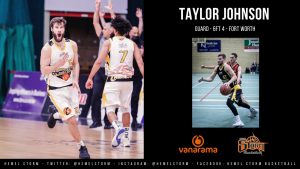