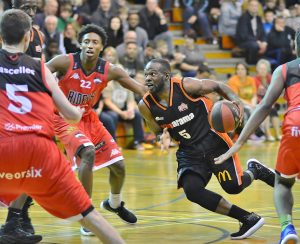 An exhibition of high speed basketball and accurate long-range shooting thrilled a packed Sportspace on Saturday as Hemel Storm took on reigning British Champions Leicester Riders in a challenge match that the visitors won 114 – 100.

Storm matched the Riders for three of the quarters and only a dominant second period (31 – 19) broke the game open. Hemel were without their leading scorer David Ajumobi through sickness but they upset the form book to win the first period 25 – 22 as starters Bode Adeluola, Jack Burnell, Lee Greenan, Wayne Yeboah and Mike Darlow absorbed Riders’ pressure, shared the ball well on offence and rebounded hard at both ends to secure extra possessions.

After their bright start Vanarama-sponsored Storm trailed 55 – 44 at half time having allowed four late unchallenged three-pointers that pushed the score difference from a manageable three points out to 11. Both

teams used the three-point shot effectively throughout the game with Riders sinking fifteen long bombs and Storm connecting on 12.

During the half-time break Storm Head Coach Robert Youngblood let his players know that while he was satisfied enough with the team’s offence, their defensive performance wasn’t good enough.

“It’s difficult to win when you give up 55 points in a half,” said Youngblood.

Storm responded well after the break and their defence was more effective matching their opponents 26-all in the third period and just being pipped 35 – 30 in the final stanza.

In an all-round fighting team performance Wayne Yeboah was outstanding for Hemel and ended as top-scorer with 22 points. His offensive rebounding was exceptional allowing him to snag five missed shots and score from close range while team captain Bode Adeluola managed the ball-handling duties well and chipped in with 17 points of his own followed by Jack Burnell’s 16 and Michael Darlow’s 15 points and 12 rebounds.

“I think the players and coaches learnt a lot from the game,” said Youngblood, “and it was excellent preparation for our first League game next Saturday away to Reading and our Cup game the next day against Ipswich.” 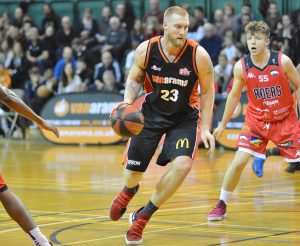 Leicester Riders are steeped in history and are the oldest professional club in British Basketball having been founded in 1967. They were founder members of the National Basketball League (NBL) in 1972 and the British Basketball League (BBL) in 1987. Their team has always been competitive but it wasn’t until 2001 when they first lifted silverware winning the BBL Play-Offs and National Cup. Since then Riders have won a further nine national titles.

Storm is at home next Sunday against Ipswich in the third round of the National Cup, tip-off 5pm. Tickets available from 'ticket & shop' drop-down menu.