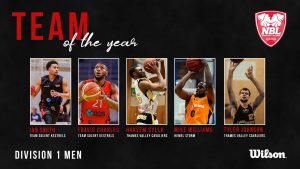 Congratulations to Mike for making the "Team of the Year". This was created by using the MVP voting from across the league. Mike has been a great addition to the Storm starting line up this season and giving the fans many lasting memories, particularly THAT shot from deep downtown!

After helping Team Solent Kestrels to a fantastic unbeaten season, it will surprise no-one to see that the man behind it all, Matt Guymon, was selected as the D1M Coach of the Year.

Completing the awards Team Solent Kestrels influential point guard Ian Smith was given the nod by his fellow teams as the league's MVP.

Smith took the league by storm in his debut season, putting up a stat line of 18.8pts/6.6reb/6.4ast (EFF:24.7) after moving over from NCAA DII programme Northern State University.