Storm lose at the death in Playoff Finals 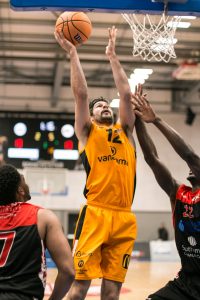 Sunday’s game saw Vanarama-sponsored Hemel Storm match up against league champions Solent Kestrels in what was to be a thrilling game in the Playoff Finals, taking place at the National Basketball Performance Centre in Manchester. Unfortunately, a last quarter comeback was not enough as Storm narrowly lost 71-69, in a low scoring contest.

The first quarter started well as Storm got off to a 0-4 lead with two baskets scored by American guard Taylor Johnson. This was quickly responded to with authority by Solent. With a 7-0 run to give Solent a 12-6 lead, head coach Dru Spinks was forced into a timeout. Storm did respond narrowing the lead to 4 before a strong end to the quarter saw Kestrels in the lead 21-13.

The second quarter saw Storm start strongly, limiting the Solent lead to 5 points in the first 4 minutes of the quarter. However, a series of turnovers gave Kestrels some easy baskets on the fast breaks, which was the overall deciding factor between the two teams. But although Storm kept turning the ball over, they did not let the lead get too much, keeping the Kestrels to a single digit lead ending the half with the scores at 41-33 in favour of Solent.

In the second half Storm knew that they needed to turn round the Solent lead, caused by a lapse of concentration on offence leading to avoidable baskets conceded. It got worse for Storm as a Max Richardson dunk forced Dru Spinks into a further timeout. After this, the focus seemed to be regained, making better decisions and narrowing the lead as a result. Both teams went into the final quarter with the Kestrels in the lead 56-45. 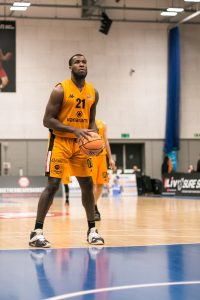 If there was any hope of Storm winning the playoffs, they had to consistently make good decisions on offence, shoot the ball well and hustle throughout. That was exactly what happened as a 2-7 run forced Solent coach Matt Guymon into his first time out of the ball game. Bode Adeluola tied the game at 57-57 with 6:58 left to play sending the Storm faithful into pandemonium as the Kestrels were quick to respond regaining a 5 point lead due to more turnovers from Storm. It took the full 24 seconds for Sam Newman to bank in a three pointer to put Storm in the lead with 2:47 remaining, and with Solent turning the ball over, Guymon took his second timeout to refocus the Solent players. An unsportsmanlike foul was called on Storm when trying to regain possession of the ball after a turnover sent Travis Charles to the line for 2 free throws to tie the game and possession of the ball. He scored both and a Gentry layup put Solent in the lead with 17 seconds to go. Storm had a chance to tie the game, but strong defence meant unfortunately another turnover allowed the Kestrels to dribble the ball to run the game clock down. The final score saw the Kestrels win the playoffs 71-69.

Storm were a credit to their huge amount of travelling fans that made the long journey to Manchester. Their support this season has been incredible.

As for Storm and the NBL, the season is over. It has been a remarkable season with some lows and some extraordinary highs. Coming into the playoffs, Storm were the underdogs beating 3rd seed Derby Trailblazers and 2nd seed Thames Valley Cavaliers. With Hemel Storm winning Best Match Night Experience and Taylor Johnson making it into the NBL Div 1 Team of the Year, Storm continue to grow year by year. 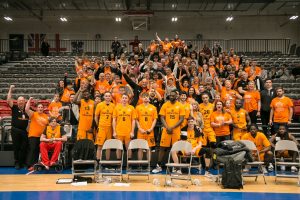