The National Basketball League Wilson Player of the Year, Greg Poleon, will be returning to Hemel Storm. Following a standout debut season, Poleon came back to Hemel for the 2020/2021 campaign and had a season to remember.

As stated by Basketball England when Poleon was announced as the Player of the Year, Poleon ‘has played some remarkable basketball. A standout force at both ends of the court, combining shooting, rebounding and a dominant defensive presence’.

The Storm faithful will remember Poleon’s record breaking performance against the Derby Trailblazers, Greg hit a Storm points record of 46, missing only 2 of 23 shots and took 10 rebounds.

Storm fans, you will get another chance to see this phenomenal talent in action. 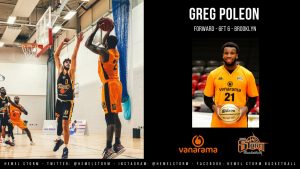