Storm cruise to a resounding victory in Westminster 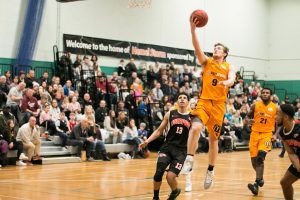 Vanarama-sponsored Hemel Storm cruised to a resounding victory against Westminster Warriors in London on Saturday night to remain in second place in NBL Division One.

The game started pretty evenly with baskets being traded and Warriors holding a small lead before Storm hit the accelerator and pulled away to go into the first break with a 16 point lead 31-15.

Walid Mumuni stretched the lead to 18 points but Warriors battled back to 14 but that was as good as it got and Sam Newman hit a 3 to go into the break 17 up at 55-38. The third quarter was pretty close but Storm ran away in the last stanza going on a ten point unanswered run to record a 32 point hammering 111-79.

Once again Storm had 7 players in double figures with good balanced scoring. Will Ashby hit 20 points, 6 assists and 3 rebounds to lead the team, Greg Poleon hit 18 with 7 boards and Bode Adeluola had 15 points and 9 assists. New signing Jordan Jackson had 14 points and 6 rebounds on his debut, and Jack Burnell made 13 with 7 boards. Mike Williams had 12 points on an unusually low shooting percentage but recorded a double double with ten rebounds. Sam Newman also had 12 points.

Storm play a huge game against one of the few teams to beat them this season, Derby Trailblazers at Hemel Leisure Centre on Saturday night, tip off 7 pm. Tickets available at www.stormbasketball.net