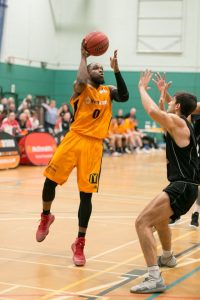 Vanarama-sponsored Hemel Storm sent their supporters home for Christmas with the perfect present by beating Reading Rockets on Saturday night.

The two teams entered the game tied for second place in the league, both on 9-3 records. Storm have played some great basketball this season but on Saturday played perhaps their most consistent 40 minutes, exerting control throughout the game.

The first quarter had Mike Williams on fire hitting 4 three pointers and grabbing 12 points as Storm ended the period 26-18 ahead. Reading came back strongly in the second period with Dixon hitting two three’s and star American guard Richards penetrating for 6 points. After 8 minutes Reading were within two points at 38-36 but Greg Poleon hit successive scores to reach the half time break with a  44-38 Storm lead.

Poleon started the second half with 5 quick points but Reading responded and kept the score close when Williams drained another 3 to send Storm into the last period ahead by 10 at 63-53. 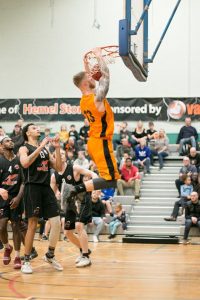 The game was far from done as Richards hit 7 straight unanswered points. Storm then hit 3 successive triples through Burnell, Adeluola and Williams  to open up a ten point lead. Storm controlled the last few minutes with some great inside slams from Hodges and saw the game out 91-75.

Mike Williams led Storm with 29 points and 9 rebounds including an astounding 8 from 11 [73%) from three point range. Lee Hodges hit 15 at 75% success rate and took 6 boards. Greg Poleon had a double double of 13 points and 11 rebounds whilst Sam Newman and Bode Adeluola both hit 11.

For Reading, Richards led all scorers with 31 points.

Storm end the year with 10 wins and 3 losses and sit in second place in the league. A great first half of the season.