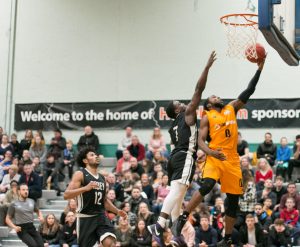 They say no games are easy and that’s how it’s proving for Hemel Storm this year when, after two tight road trips last weekend, they played out a hard fought game against Barking Abbey Academy on Saturday night.

Barking is an academy that gives talented players the chance to work every day in an elite development programme and they have produced some notable players over the years. So, while they came into the game with a poor win loss record this season, Storm knew they would be competitive, and so it proved, as the lead changed hand 13 times in a hard fought match up.

A tight first quarter saw the visitors emerge with a 20-18 lead, their centre Troy Hughes proving a real handful for his opposite number Lee Hodges as he made his way to 12 first half points. Barking stretched their lead to 5 at the half, leading 42-37 with athletic drives to the basket and good outside shooting. 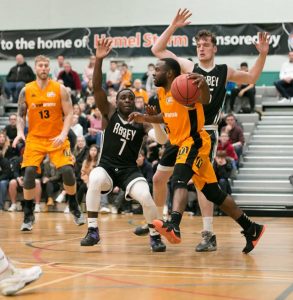 As so often this season, the Storm fightback started in the third quarter as they held the opposition to just 17 points whilst adding 25 themselves, but the variation of zone defences were still proving a challenge to the Storm offence.

It wasn’t until the final ten when the Storm effort got its rewards and the intensity of the defensive play generated steals and turnovers, creating fast break opportunities notable for some nice interplay between the two guards Williams and Adeluola.  Greg Poleon was also using his body well to create space under the basket for some high percentage conversions as Storm offered a variety of threats, going on a 10-4 scoring run sealed by a monster dunk from big man Lee Hodges that had the crowd on their feet. 24 points came from fast break points, converting defence to offence and that ultimately gave Storm the win 90-74.