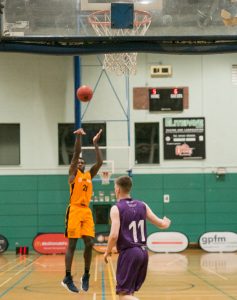 A superb defensive display saw Vanarama-sponsored Hemel Storm to a 96-74 victory over Loughborough Riders and secure second place in the NBL Division One table in front of a packed and noisy StormDome on Saturday night.

The visitors, who won the league recently, are known for their accurate long range shooting, and so it proved in the first quarter as they hit 6 shots from downtown with the Hemel defence seemingly unable to close the shooters down. Greg Poleon had also found his shooting boots and kept Hemel moving but they trailed 25-32 at the first quarter end. The second period showed some adjustments as Storm fought their way back to take a lead, only to surrender it in the final minutes of the half as they found themselves in foul trouble and the opposition scored ten straight free throws to maintain their lead 49-56 at the half.

Loughborough’s American import Rasheed Worrell was proving particularly hard to handle as he made his way to a massive 25 point first half haul. This looked like a game that would go to the wire, and the visitors were getting a lot of second shots as Storm failed to keep them off the offensive glass. Storm had conceded 56 points in the first half and it was clear improvements had to be made. 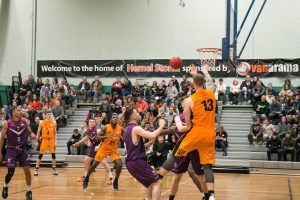 And how they were made. Coach Spinks had varied his defensive alignments and notably went to a 1-3-1 zone formation that caused Loughborough no end of problems as it took away their favoured offensive sets. From leading 70-68 at the end of the third period, Storm went on a 19-0 scoring run, holding the opposition scoreless in eleven straight possessions as they took a firm stranglehold defensively. From the defence, turnovers occurred, and fast break chances came. Storm hit 30 points from turnovers, 20 of which were fast break lay ups.

The numbers from the game made interesting reading: Americans Poleon and Worrel both posted great shooting stats, each scoring 13 of 17 attempts at a remarkable 77% shooting rate. Crucially for Storm, Worrell only made 8 second half points. Storm were out rebounded for the first time this season as Loughborough’s offensive rebounding gave them the edge, but Storm hit a season high 85% from the foul line. Loughborough shot 50% from three point range in the first half but by the end it was just 22%, such was the level of defensive intensity from Storm. Overall, the visitors shot 39% and Storm 52%. The most crucial number is that having conceded 56 at the half, Storm only conceded 18 more points in the second half and only 6 in the last quarter. A fantastic effort and a real team performance. It might just be the best half of basketball Storm have played.

Storm continue their league action at home this Saturday, another tough match against Worthing Thunder. Tip off 7pm. Tickets available at www.stormbasketball.net