After a winning weekend Hemel Storm moved up to fifth spot in the National League Division One table and advanced to the quarterfinals of the National Cup.

Hemel will now play Thames Valley Cavaliers away in the last eight after the Berkshire-based team powered to a 93 – 65 victory over Essex Leopards.

Despite being without key players Bode Adeluola, Dave Ajumobi and young hot shot guard Jack Burnell in Bury on Saturday they still demolished a struggling Lancashire Spinners team 92 – 47 in a game where the home side was outscored and outplayed in every quarter including a dominant  25 – 9 last period.

In stark contrast Sunday’s fourth round National Cup clash against Kent Crusaders was a high level, possession by possession battle with no quarter given or asked for by either side. Storm was back to full-strength and throughout the contest big individual offensive and defensive plays were made at both ends of the court.

Vanarama-sponsored Storm held a slim five point lead (26 – 21) after successful free-throws from Courtney Van-Beest ended the first quarter. The teams then drew the next period 15 points apiece and the third stanza 14 each. Both teams locked down on defence and made every possession and every shot as difficult as possible.

Storm Coach Robert Youngblood substituted freely so that his team was able to maintain the kind of intense defensive pressure that is becoming a Hemel trademark together with their unselfish attacking play. Youngblood was forced to bench the recently signed A J Roberts when he picked up early fouls in the first half, but the American combo-guard from California returned to the court in the second half to end the game as Storm’s second leading scorer with 10 points and he also assisted on four other baskets.

A dunk and free-throws by Hemel’s top scorer seven-foot centre Lee Greenan (23 points) opened some daylight between the sides and gave Hemel its biggest lead at 66 – 57 before Crusaders fought back and cut the margin to six on a Caleb Fuller three-pointer with under four minutes to play. 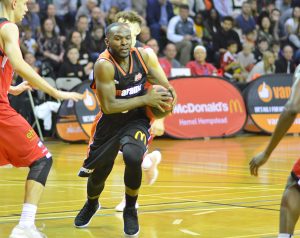 But on Storm’s next two possessions their captain, Adeluola, broke lose to score crucial back-to-back three-pointers and the visitors could sense victory much to the delight of their enthusiastic band of traveling supporters.

“I think it was a great team win,” said a delighted Youngblood, “In the end our defence prevailed and we’ll continue to build on that in practice.

“Before the game we felt the keys to winning were to hold them under 70 points, dominate from the inside with great rebounding and inside play, and really take care of the ball. And we achieved all three goals.”

The Coach had special praise for Greenan: “Lee was fantastic today, when he plays like that and our team performs at this level then I believe that we’re on our way to some silverware this season”!

But Youngblood was quick to point out that everyone who was put into the game contributed to the victory.

“When we needed to sub five for five at one point, the strategy was successful and allowed us to stay in control,” said Youngblood.

Storm face a tough road trip to the north east at the weekend and will play reigning League champions Team Northumbria on Saturday before taking on Team Newcastle University the next day both games in National League Division One.

Storm’s next home game at Sportspace is against Worthing Thunder in National League Division One action on Sunday 12th November, tip-off at 5pm. Tickets available from the 'tickets & shop' drop-down menu above