Storm defeat Champions to go second in the League 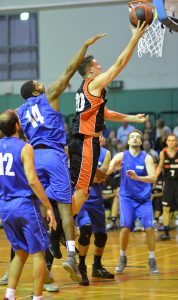 Hemel Storm returned from a weekend in the North East with the scalp of reigning Division One champions Team Northumbria on Saturday and a hard fought victory over Team Newcastle University the following day.

The wins move Vanarama-sponsored Hemel to second place in National League Division One on the same won-lost record as top side Loughborough Riders but with an inferior points difference.

In both games Hemel’s depth was made to pay rich dividends as their bench outscored Northumbria’s 24 – 11 and Newcastle’s by an impressive 28 – 9.

Hemel produced a sensational opening quarter against the Champions forcing a time-out after only four minutes from the home team’s Coach Marc Steutel with his side trailing 4 – 13. But when the teams returned to the court the visitors stifling defence and unselfish offence continued and, aided by three-pointers from AJ Roberts, Jack Burnell and eventual top-scorer Mike Darlow (18 points), Storm’s  advantage stretched to 26 – 12 by the end of the period.

The lead grew to 31 – 12 on a Burnell three-pointer and Wayne Yeboah jump-shot early in the second period before Northumbria mounted a mini 10 – 4 run. Storm hit back with a run of their own and by half-time had extended their lead to 47 – 30.

The teams traded baskets in the third as the pace of the game increased and Northumbria was able to get within striking distance at 49 – 63. And early in the final stanza Storm’s lead was down to single figures, 65 – 57, before they regrouped to dominate play at both ends of the court holding their opponents to just nine more points while pouring in 24 themselves.

A delighted Hemel Coach Robert Youngblood said: “On Saturday we were all business, we jumped on them from the start and they were never able to recover from that. The guys were fantastic from top to bottom as a team, the teamwork, spirit, pride and chemistry were second to none.

“I thought that Mike (Darlow) and Jack (Burnell) in particular were great and Wayne (Yeboah) is our ‘glue’ guy that you can depend on every week. But everyone on the team had at least one assist and proved that they’re prepared to make the extra pass for the good of the team.”

On Sunday Storm had to claw themselves back from their most sluggish start of the season as Newcastle currently second from bottom in the League jumped out to a 22 – 12 first half lead. But after starting the second stanza with three-pointers from Burnell and Courtney Van-Beest Hemel got a grip of the game with a 16 – 4 run orchestrated by their dynamic point guard and Captain Bode Adeluola who eventually finished as his team’s top scorer with 24 points including four three-pointers. By half time the teams were locked at 37-all.

After the break it was all Storm as they turned up the defence and rained in six three-pointers to go into the final period ahead 60 – 51. But a stubborn Newcastle would not surrender and with three minutes to play they trailed 62 – 68 and Hemel was left to seal a 81 - 71 victory from the free-throw line as the home team was forced to foul to stop the clock and gain extra possessions.

“We got off to a really slow start,” said Youngblood, “I think we were a little complacent even though I told the guys that we were in for a battle. After that first quarter we started playing Storm defence for the next three quarters we outscored them by 20 points.

“Bode was outstanding and carried us at times. But this was another battle-tested win early in the season, two wins from two games in the North East means you’ve had a great weekend. Onwards and upwards!”

Storm’s next home game at Sportspace is against Worthing Thunder in National League Division One action on Sunday 12th November, tip-off  5.00pm. Tickets available from the 'tickets & shop' drop-down menu above