Storm start season with a win 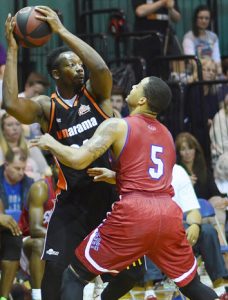 Hemel Storm got their season off to a winning start on Saturday with a hard fought 72 – 60 win on the road at Leicester Warriors in a National Trophy pool game.

In a defence dominated and at times scrappy clash Storm used a second quarter 21 – 9 blitz to recover from a lack-lustre start that saw the home team ahead 14 – 10 after the first period.

A dramatic reduction in Hemel turnovers in the second half and standout performances from new signings David Ajumobi and Courtney Van-Beest along with Mike Darlow and veteran Walid Mumuni were the keys to the victory.

Storm Head Coach Robert Youngblood juggled his line-ups late in the game in a bid to stop Leicester’s ability to break down his team’s defence. Mumuni in particular came into the contest and with Hemel ahead by six points with five minutes remaining and led by his intense defence Storm was able to build a final 12-point margin.

“We made some adjustments and came through a stern test,” said Coach Youngblood.

“The performance gives us something to build on. We’ll have to cut down unforced errors as the season progresses but we showed some mental toughness and versatility that will stand us in good stead.”

Hemel are in a three-team regional pool with Leicester Warriors and Loughborough Riders, the top team qualifies for the competition’s semi-finals. Storm will face Loughborough away on September 30th.

Storm is at Sportspace on Saturday for a challenge match against National League side London Greenhouse Pioneers following the late withdrawal from Division One of London Lituanica. Tip-off 7pm – tickets available at www.stormbasketball.net