Storm through to the Play-Offs

Hemel Storm cemented their place in the top eight National Championship Play-Offs with a convincing 116 – 93 win over Derby Trailblazers at Sportspace on Sunday.

And after losing at home the previous evening to League runners-up Solent Kestrels, Hemel have finished seventh in the National League Division One table and will meet Solent again on their home court in Southampton in the Play-Offs quarter-final knock-out round. The game will be played on the weekend of April 7th/8th.

Vanarama-sponsored Storm have lost twice to Solent this season, a controversial 86-87 defeat in Southampton in January when a foul was called on Hemel’s AJ Roberts in the last second which sent the home team to the free-throw line to seal the win, and a more emphatic 87 – 101 loss on Saturday.

If Hemel can come away from Southampton in two weeks’ time with a win they will have a home draw in the semi-finals.

On Saturday Storm let an early 17 – 8 lead slip in the first quarter and trailed 21 – 23 as the period ended.  A 15 – 0 Solent run did the damage as Storm’s offence misfired and they struggled to contain the visitor’s American pairing of forward Joe Tagarelli (30 points and 15 rebounds) and guard Herman Senor II (18 points and 10 assists) who accounted between them for 19 of Solent’s first quarter points.

Solent dominated the second period seemly scoring at will and crashing Storm’s boards to recover missed shots and earn second and even third shot attempts at basket. The visitor’s steadily pulled away holding Hemel to 19 points in the period while pouring in 35 themselves to take a 58 – 40 half-time lead.

“We just were not pursuing the ball or competing at a level we needed to,” said Storm Coach Robert Youngblood. “They were playing harder than us and that’s not acceptable at our Club and especially on our home court. It was very disappointing and there are no excuses.”

With a little over two minutes to go and Hemel trailing 55 – 80 they produced a 10-point run without reply as Tom Adorian, Lee Greenan and Jack Burnell combined to claw the deficit back to a more manageable 15 points and head into the fourth quarter 80 – 65 adrift.

The teams’ traded baskets in the final period before consecutive jump-shots from Hemel captain and top-scorer Bode Adeluola (19 points) closed the gap to 11 points at 82 – 93 but it wasn’t enough.

“In the end we shot at a better percentage than they did but they got 21 more attempts by completely outrebounding us, coming up with loose balls and turning us over 18 times,” said a frustrated Youngblood.

“But we’ll re-group now, get our injuries and niggles sorted out and prepare for when we see them again in a couple of weeks in the Play-Offs. We have a great opportunity to make amends.” 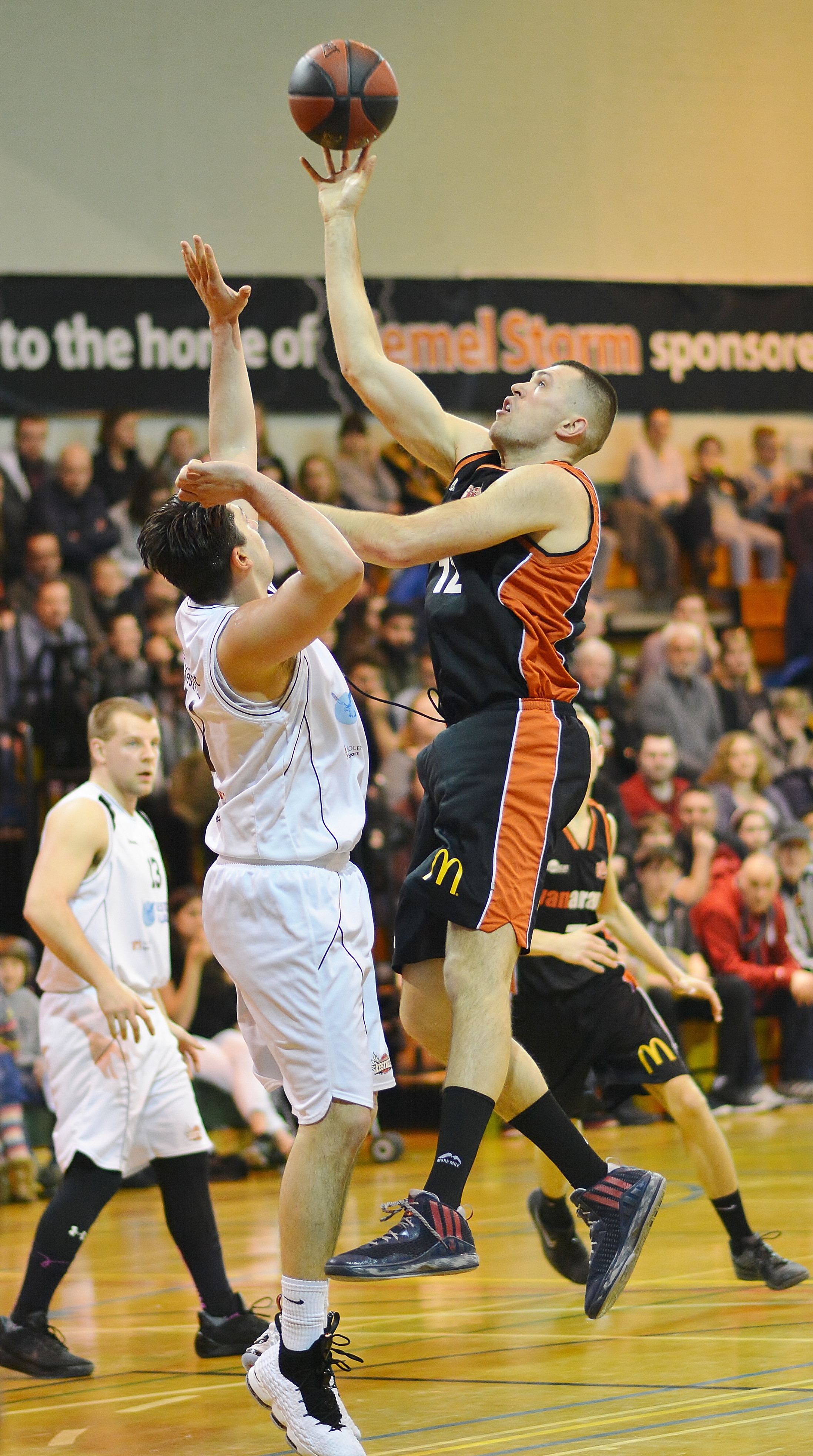 On Sunday afternoon an accomplished performance from Storm saw them close their League season with a 116 – 93 victory at Sportspace against second from bottom side, Derby Trailblazers.

A blistering first period saw Hemel jump to a 17 – 4 lead and dominate the quarter behind 12 points from AJ Roberts and 10 from eventual joint top-scorer Tom Adorian (20 points, 8 rebounds).

It was Hemel’s turn to dominate the rebounding as they won the battle of the boards 48 to 34 and also shot at an impressive 52 percent success rate that included eight triples.

By the end of the third quarter Storm’s lead had ballooned to 96 – 72 as Coach Youngblood substituted freely and protected some key players who are carrying injuries and his team controlled the final stanza to gTuarantee their place in the Play-Offs.

After the final buzzer sounded all of the youngsters in the crowd went down to the court and lined the outside so that the players and staff could give them all ‘high fives’ as a thank you for the fantastic support that the team has received so far this season.

Photo captions:
Top: Captain Bode Adeluola led all scorers with a combined 39 points over the weekend.