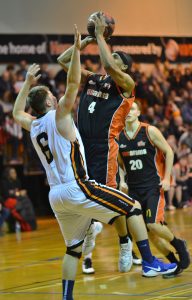 After a double winning weekend Hemel Storm sit on top of National League Division One and have qualified for the semi-finals of the National Cup.

On Saturday Hemel were in League action in the north-west and convincingly beat perennial title contenders Manchester Magic 77 – 55 and next day clinched a dramatic 91 – 89 victory over Thames Valley Cavaliers when Storm’s Dave Ajumobi tipped-in his missed shot just before the final buzzer. The win was Storm’s ninth in a row.

In Manchester a supreme defensive effort by the Vanarama-sponsored Storm held the Magic to 22 points below their game average to date.

After trading baskets early in the first quarter Magic briefly held a six point lead but the visitors’ dominant rebounding, intense defence and unselfish offence began to tell. As the period was ending Storm’s man-of-the-match AJ Roberts (29 points, seven rebounds, five assists, one block, and one steal) sank a jump-shot and his team took a 20 – 19 lead that they would not surrender.

In the second quarter Hemel broke the game open outscoring the home side 24 – 11 including three-pointers from Mike Darlow and Jack Burnell and unstoppable drives to basket by second top scorer and team captain, Bode Adeluola (12 points).

The third quarter was a possession by possession defensive battle as Manchester tried to find a way back into the game but it was Storm that came out on top restricting the Magic to just 12 points while scoring 16 themselves. The last 11 points of the stanza were sunk by Roberts including a triple that put his team 54 – 36 in the lead.

The final quarter was a carbon copy of the third and once again Storm put in an impressive defensive shift and edged it 17 – 13.

Standout statistics from the game were in the assists column where Hemel dished out 20 to Manchester’s 9, and also rebounding with the visitors controlling the boards 52 to 44 against a traditionally strong rebounding side.

Back to back games over a weekend are always challenging and so it proved as Storm took on promotion hopefuls Thames Valley Cavaliers from National League Division Two in the National Cup quarter-finals.

Storm’s exploits in Manchester seemed to have taken their toll as a sluggish performance defensively resulted in a free scoring clash with the team’s trading baskets and neither being able to establish control of the game. By half-time Hemel were just ahead 50 – 44.

The athletic Cavaliers stayed in touch throughout the third period despite Storm’s captain Bode Adeluola (23 points) hitting a series of go-ahead baskets.

The home team went into the final 10 minutes with an upset victory in mind and within reach at 68 – 74. 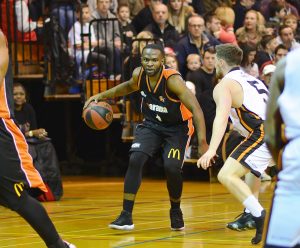 Storm was able to maintain their edge at 89 - 83 when with one minute twenty seconds to play the game entered its dramatic climax.  A J Roberts was judged to have committed a disqualifying foul as he attempted to block a close range shot attempt by Cavaliers’ Robert Banks. The call meant that AJ could take no further part in the game and the home team were awarded two free-throws and side-line possession.

Banks scored both free-throws to close the gap to 89 – 85 and with the new possession they scored again to get within two points, 89 – 87. As the clock ticked down Adeluola was fouled but missed both free-throws and the home team’s leading scorer, Martelle McLemore (30 points), drove to basket and tied the game at 89 with 40 seconds left.

Storm lost their next possession when Ajumobi committed a charging foul and Thames Valley had a chance to take the lead but Storm’s defence forced Abdoulaye Sylla to miss from close range and Hemel’s Mike Darlow snared the rebound.

Storm advanced the ball and with eight seconds remaining Ajumobi drove inside but his shot was smothered, he grabbed the rebound and his second shot bounced off the rim but he was able to tip it back into the basket a split second before the buzzer sounded and Storm players and staff ran onto court to celebrate their 91 – 89 win.

Storm Head Coach Robert Youngblood commenting on the weekend said: “We went to Manchester on a mission. We wanted to make a statement and to show that we are for real and true title contenders – not pretenders!

“The entire team was fantastic but AJ was on another level and looked like a scoring machine. The team defence was the best of the year for us and we were locked into our game plan from the tip.

“The Cup game was always going to be tough against Thames Valley as they are a Division One level team.

“Bode played a great game. AJ and Lee were quality from start to finish and Courtney and Jack provided a huge spark off the bench. Our depth continues to be a huge part of our success.

“This team is just starting to click and when we do it’s going to be scary how good we can be.”

Storm have another double-header this weekend when on Saturday they take on Bradford Dragons at Sportspace, tip-off 7pm. And the following day they play Derby Trailblazers away, both games in National League Division One.

Tickets for the home game on Saturday are available from the 'tickets & shop - match tickets' drop-down menu above.

Limited places are available to travel with the team to Derby on Sunday....go to 'tickets & shop - away travel' above