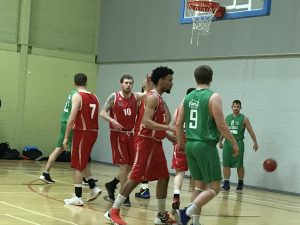 After a bright start from Hemel it was the visitors who edged into a three point first–quarter lead at 28-25.  Bulldogs’ dominance continued into the second period as they amassed a commanding 14 point lead at 46-32 with three minutes remaining. A Storm timeout was called to re-energise the defence resulting in a 13-0 run to cut the gap to 46-45 at half time.

Both teams struggled to secure an advantage in the second half as the lead changed an incredible 11 times.  But in the last 4 minutes Bulldog’s sent their opponents to the free-throw line 11 times as Hemel attacked the basket aggressively.  Storm were successful on 9 of the free-throws which was enough to get them over the line for a 4 point victory.

Coach Allin said: “We focussed on maintaining the defensive intensity that we showed in last week’s game – and we achieved that at some crucial stages of the game.  I was really pleased with the effort and contribution of the whole team today:”