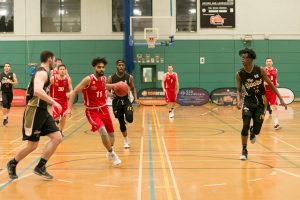 It was an encounter that once again showed Storm’s inconsistencies that have plagued them all season.  Storm trailed by just two points after the opening quarter but disastrous second and third quarters put them behind by as many as twenty points.

Hemel came back strongly in the final period.  Their swarming defence forced the visitors into multiple errors enabling Storm to cash in on easy fast break points.  Hemel cut the deficit to just three points with a couple of minutes remaining but were unable to complete the turnaround.  Two free throws in the last minute gave the Hoods a five point victory.

Assistant Coach, Mike Darlow said: “Despite being down by so many points, we never felt we were out of the game.  The effort at both ends of the court in the last quarter was outstanding.  But we need to do better at minimising our turnovers and maintaining our defensive effort for forty minutes.”