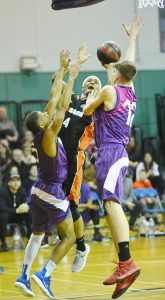 Hemel Storm were 20 points adrift going into the last quarter against Loughborough Riders away on Saturday in a National League Division One clash before an incredible defensive effort saw them claw back the entire margin and with five seconds left have a shot to win the game.

With the scores tied at 74 all, Storm Coach Robert Youngblood called time-out and diagrammed a play designed to spring Hemel’s leading scorer AJ Roberts free for the winning basket but the American guard’s effort bounced off the ring as the buzzer sounded, and the game went into overtime.

Hemel’s fourth quarter defence held the League’s second-placed team to just six points – Loughborough’s lowest quarter score of the season - while their offence finally began to click and sparked by a massive three-pointer from Roberts they poured in 26 points to set-up the game’s dramatic finale.

Despite the final result Coach Youngblood recognised the supreme fourth quarter effort from his side but was disappointed that Riders were able to build such a substantial lead by winning each of the first three periods, 21 – 16, 27 – 17 and 20 – 15.

“I don’t think many people would have given us much chance but I thought the character of our guys really shone through,” said the Coach.

“When you’re as cold on offence as we were for the first three periods you have to find a way to get back into the game. It was a magnificent effort and we couldn’t have asked for anything more – we had the final possession and a chance to pull off the win.”

Vanarama-sponsored Storm who won the National Cup in January beating Loughborough in the semi-final are now in seventh place in the National League table with four games left to play and are fighting for the highest possible finish and a spot in the end-of-season, top eight National Championship Play-Offs. 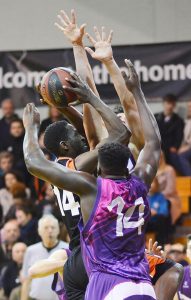 Hemel will be at home against Kent Crusaders and Solent Kestrels who they lost to in the reverse fixtures, and also Derby Trailblazers who they defeated 70 – 67. Their only away game left is at Leicester Warriors who beat Hemel 83 – 77.

Storm start on the final run-in to the Play-Offs at Sportspace this Saturday when the visitors are Kent Crusaders, tip-off 7pm. For tickets go to the 'tickets & shop@ drop-down menu above