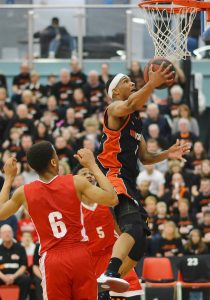 Hemel Storm Storm’s Cup Final MVP AJ Roberts was injured in the closing minutes of a 79 – 76 National League Division One loss away to a young Kent Crusaders side on Sunday.

Roberts was hurt as he drove to the basket and fell awkwardly. His blistering performance helped Vanarama-sponsored Storm lift the trophy last week and he will now have an assessment and treatment on his injured ankle before next Saturday’s home game against Lancashire Spinners.

Throughout the game on Sunday when Hemel’s aggressive attacks forced the home team to foul Storm didn’t capitalise from the free-throw line and ended up with a season’s low 11points from 21 attempts.

Early in the fourth quarter Storm led by seven points at 62 – 55 on a Tom Adorian jump shot but couldn’t extend their advantage as their shooting touch deserted them and allowed Crusaders back into the game.

With a little over a minute remaining a Micah Savery Richards jump-shot put Kent 77 – 76 up and as Hemel fouled to stop the clock and get extra possessions Crusaders scored from the free-throw line to seal the win.

Storm Coach Robert Youngblood said: “All credit to Kent and how they stuck to the task but it felt like we just made so many uncharacteristic mistakes that to a certain extent we beat ourselves.

“We didn’t shoot well (39 per cent success rate) from the floor or the free-throw line and in a close game those misses really hurt you. 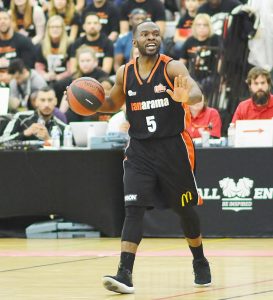 “It was a loss we’re all disappointed about but we’re still on track to achieve our goals this season; we have the National Cup in the trophy cabinet and we’re headed for a top four finish in the League which will give us home advantage in the Play-Offs – that’s our focus now.”

Storm are at Sportspace on Saturday against Lancashire Spinners in a Division One National League clash, tip-off 7pm. Tickets are available from the 'tickets & shop' drop-down menu above.