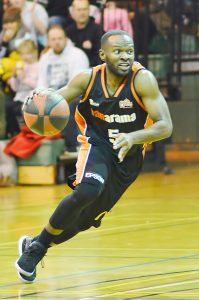 An improved showing from Hemel Storm in Worthing on Saturday wasn’t enough to help their bid for a top four finish and home advantage in the end-of-season Championship Play-Offs.

In a National League Division One game the Vanarama-sponsored Storm was on the wrong end of a 78 – 72 score line against the hometown Thunder and Hemel now slide to sixth place in the table.

Thunder led for most of the game but Hemel were always in touch as eventual top-scorer and captain Bode Adeluola (18 points) marshalled his team from the back court and orchestrated a recovery whenever Worthing threatened to break away.

But the home team’s Jorge Ebanks and their captain Brendon Okoronkwo were able to take up the slack and the period ended with the scores knotted at 24 apiece.

Taylor was held to a season’s low eight points – 22 below his average - as Hemel’s AJ Roberts, Walid Mumuni and Courtney Van-Beest shared the assignment and kept him in check throughout the game.

And Mathis was shackled by Storm’s Dave Ajumobi restricting him to scoring just four from 22 shot attempts and bringing praise from Coach Robert Youngblood: “Ajumobi’s individual defence on Mathis was superb within our overall defensive scheme,” said Youngblood.

While Storm was able to execute their defensive plan well it was, once again, their shooting that let them down as they scored at only a 38 per cent success rate.

The visitors had opportunities to take a lead into the locker room at half-time but missed their chances and handed the initiative to Worthing who edged the quarter 19 – 15 to lead 43 – 39 at the break.

“It was frustrating,” said Youngblood, “our shooting let us down – again – and especially when we worked the ball inside or drove to the basket for close range attempts.”

And the home team’s advantage grew in the early part of the second half as a 9 – 0 run, six of those points coming from Ebanks, gave Thunder their first double digit lead at 57 – 44 which was temporarily ended by an AJ Roberts’ jump shot but the home team was still able to take a 64 – 54 lead heading into the final stanza.

Hemel really came out fighting in the fourth period and scored the opening seven points while holding Worthing scoreless.

And with five minutes remaining a Van-Beest free-throw got Hemel right back into the game at 66 – 64. The teams then traded baskets before dagger three-pointers from Worthing’s Mathis and James Grinham took the wind out of Storm’s recovery and Thunder were able to control the clock and hold on for the win. 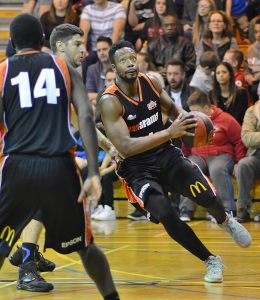 The six point victory secures the head-to-head for Thunder who lost by two points to Storm at Sportspace in November which could be critical in deciding the final League placings.

“I thought that we played hard and together in this game, it was great to see some individual players getting back to how they played earlier in the season,” said Youngblood.

“Overall there were lots of positives to build on; our ball movement and defensive work were great. I can sense us getting back to form and we’ll be ready to get wins at home against Manchester next Saturday and then away on Sunday in Bradford.”

Storm are at Sportspace on Saturday against Manchester Magic - the team they beat in the National Cup Final - tip-off 7pm. For tickets go to the 'tickets & shop' drop down menu above.