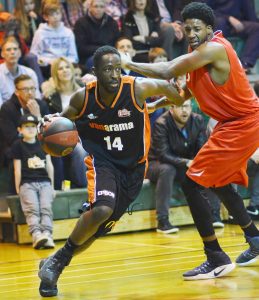 Hemel Storm’s strength in depth proved crucial as they defeated a talented Reading Rockets 88 – 81 at Sportspace on Saturday in a National League Division One game.

In a high paced, possession by possession battle Hemel fought back from a 16 – 6 deficit in the opening period to lead by six at half-time after the home team’s Courtney Van-Beest scored two jump-shots and a free-throw in the last minute.

The visitors recovered after the break as Hemel’s offence went cold and they took a 64 – 65 edge into the last quarter.

But in a magnificent defensive stand Reading were held in the last period to just 16 points – their lowest quarter tally of the game – and Storm went back in front 71- 68 after a Mike Darlow free-throw and Wayne Yeboah driving lay-up, a lead they never surrendered.

Crucially Vanarama-sponsored Storm was able to stifle Rockets’ offence in the fourth period and restrict their impressive American guard Jerrod Hendricks to just three of his 21 point haul.

The individual play of Yeboah in the decisive last ten minutes – in a total team effort - was outstanding as he scored 10 of his game total 13 points after grabbing offensive rebounds and loose balls and leading by example with tenacious and all-effort defence.

Hemel’s Coaching Director Dave Titmuss commented: “When the game was on the line in the fourth period everyone stepped up defensively and they each deserve credit but Wayne made some big individual plays. He’s a great example to all of our young fans.”

With two minutes remaining Storm’s top-scorer AJ Roberts (25 points) was fouled as he attempted a jump-shot and his successful free-throw stretched Hemel’s advantage to 10 points at 84 – 74 and brought cheers from the home fans right to the final buzzer.

Storm Head Coach Robert Youngblood said: “We knew it would be a battle, Reading has undoubtedly one of the most talented rosters in the country and we’d lost to them away by a point earlier in the season.

“They started the game extremely well and at a high tempo just as we expected them to. But we got back on terms and our fourth quarter defence was fantastic and a key to the win. 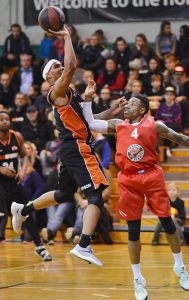 “We allowed them only seven field goals and all but one of those shots was taken under pressure. If we’d hit more of our free-throws the winning margin would have gone into double figures.

“This was a great team win for us. Our bench contributed 47 points – over half our total score – and allowed us to keep pace with Reading and go into the final quarter with rested guys and a defensive mind-set.

“It was a tough game and excellent preparation for the Cup Final against Manchester next Sunday.”

Storm move up to fourth place in the table and Reading slip to sixth.

Storm’s next home game is on Saturday 3rd February in National League Division One action against Lancashire Spinners, tip-off 7pm. Tickets are available from the 'tickets & shop' drop-down menu above