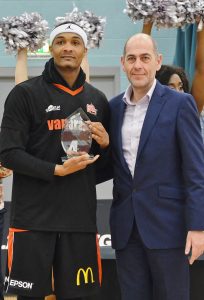 Hemel Storm battled back from a 12 point first quarter deficit to dismantle Manchester Magic 94 - 77 on Sunday and lift the 2018 National Cup at UEL Sportsdock.

In the second half Hemel’s trademark tenacious defence and lightning fast breaks overhauled and dominated the Magic to thrill the delighted ‘Storm-Troopers’ packed into the arena.

AJ was quick to acknowledge his teammates: “It’s a team game and win,” he said. “This was big. You could just feel the vibe and you want to perform well to make the fans happy.”

The victory is Vanarama-sponsored Storm’s first national title since winning promotion to the National League’s top flight having previously won the National Patrons Cup – a competition that excludes Division One sides - in 2011 and again in 2012.

The teams traded baskets in the first period until with four minutes left Storm’s offence suddenly dried up and Manchester went on a 17 point run that included two triples from their captain Stefan Gill and one from Michael Anumba to give them a commanding lead, 31 – 19. 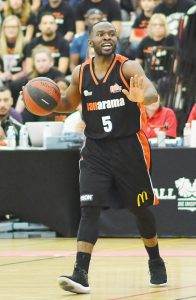 But as Storm Coach Robert Youngblood juggled his line-up Hemel dug deep and chipped away at the deficit throughout the second stanza. Although outsized under the basket David Ajumobi’s individual defensive effort and rebounding prowess – he finished with eight boards - encapsulated Hemel’s mental toughness as the game momentum began to swing their way.

Back-to-back triples from Walid Mumuni and Jack Burnell coupled with Storm’s improved  defensive pressure ignited a 14 – 6 run and when a Courtney Van-Beest jump-shot at the end of a fast- break swished through the net, Hemel were right back in the game and within two points at 45 – 47 as the half-time buzzer sounded.

A spirited and determined Storm dressing room during the half time break helped to ignite an impressive and intense defensive shut-down from the restart that held Manchester to just four baskets from the field in the period and four free-throws for a total of just 12 points while Storm wracked-up 25 to a deafening roar from the stands.

Hemel’s dynamic point guard and captain Bode Adeluola kept the scoreboard ticking over with a triple and a pull-up jump-shot for two points before AJ ran in the next 9 points. And when Walid Mumuni’s free-throw swished through the net with a couple of seconds left, Storm ended the third period 70 – 59 ahead. 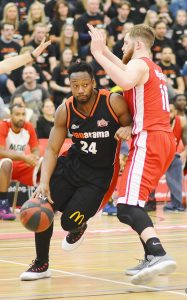 Fourth quarter fireworks from AJ at both ends of the court ensured that Storm would not let Magic back into the game. The Hemel combo-guard stole the ball twice, sank three triples including a fade-away from the deep corner that brought the crowd to its feet, and dished out two assists as Manchester failed to contain him.

Coach Youngblood’s five for five substitutions with a couple of minutes left allowed the fans to acknowledge the players leaving the court and with the final seconds ticking off the clock celebrations broke out in the stands.

“I’m emotional right now,” said Coach Youngblood. “I wanted to come to Hemel and win some silverware because the Club and all the volunteers deserve it. And I feel blessed and happy for this team.”

Manchester Coach Paul Middleton in congratulating Hemel said: “They we’re up for it and you could see it in the fans, the coaches and players. They really D’d us up. They should be proud, they deserved to be here.”

Dave Titmuss, Head of Storm’s Basketball Programme said: “We’ve been building towards this since we won promotion to Division One. We’re a great Club with fantastic support which was very evident today; it was just like a home game!

“But this is just the start; we want to be in the conversation for national honours every season. Coach Youngblood and the guys were on a mission today and got this win for everyone that believes in what we’re about.”

Storm fan Sir Mike Penning, Hemel MP said: Huge congratulations to everyone at Hemel Storm on this incredible achievement of winning the National Cup. The team were in top form. I pay tribute to the large number of supporters who made the journey to the University of East London. Angie and I were proud to attend and both thoroughly enjoyed it. It was a great day out and the Club’s sponsors provided great support and contributions on the day.”

The National Cup competition has a long history and was originally launched as the ‘National Championship Cup’ way back in 1936 as the first attempt to develop a regular national basketball competition in England. 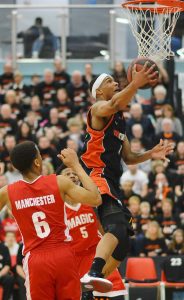 The Cup was initially organised by the Amateur Basket Ball Association of England and Wales (ABBA), a forerunner of the current Basketball England which is the governing body in England.

During World War Two the competition was put on hiatus, with the last pre-war winners, Birmingham Athletic Institute, retaining the trophy for the duration of hostilities!

The National Cup will be on display at Storm’s next home game at Sportspace on Saturday 3rd February against Lancashire Spinners, tip-off 7pm. Tickets are available from the 'tickets & shop' drop-down menu above.